14 years-old Prashant was in Delhi’s Batra Hospital for treatment of typhoid in April 2006. His condition worsened and he died in May. Prashant’s family alleged that he became brain dead in April itself, but the hospital did not inform and put “brain dead” boy on ventilator without family’s consent. The moment family ran out of funds, the hospital stopped ventilation. (timesofindia.indiatimes.com-24.06.2021).

There are hundreds of such hospital horror stories reported in the media. Besides ‘Covid Pandemic’, ‘Rape’, and ‘Murder’—the deafening headlines scream:

“Hospitals have become a big industry instead of discharging their responsibilities to provide succour to distressed patients”—lamented Supreme Court (Times of India: July 20, 2021).

All hospitals are not guilty. But, when a strong health sector regulator is absent, the culprits remain unpunished. The rot continues and spreads.

State Of Affairs—Hospital  Or Hotspots Of Wrongdoings?

Many hospitals exploit by extending hospital stay for no reason. They shift patients to ICU, or put them on ventilators when not required. They hold patients or dead bodies hostage over payment issues. It’s akin to—skin the body, devour the flesh, then force the skeleton to give away its bones.

Many hospitals force doctors to prescribe unnecessary hospitalization, tests, and surgeries, and charge huge sums for these. Such hospitals don’t inform patients about their rights, line of treatment, or cost.

This institutionalised robbery ruins lives and shatters dreams. A fly caught in the spider’s web, the patient gets entangled in permanent poverty.

The Covid crisis of 2020 has proved how rotten the hospital system has become and how deep-rooted is the problem. There was nation-wide hue and cry about the products, processes, and prices related to Covid testing and treatment in the hospitals—a grim and gory story of organised loot.

Affairs Of The State—Inadequate Laws, Implementing Agencies, and Budgets

Under pressure from public and media, authorities promise action against erring hospitals. But as seen in Covid cases last year, they issue mere warnings. This is as effective as putting band-aid on a fracture. Hospitals remain immune because both the regulating agencies and the laws are weak.

There are laws such as The Clinical Establishments Act, The Consumer Protection Act, and The Nursing Homes Act. But most states are not strict in implementing these laws.

There are governance bodies such as State Medical Councils (SMCs), Indian Medical Association (IMA), and National Medical Commission (NMC). But it is rare that these cancel an erring doctor’s or hospital’s registration, or take other legal action. These bodies exist to serve the hospitals and doctors. The Consumer Courts are not effective–they take long time in delivering judgments and lack expertise in health related technical matters.

According to Global Burden of Disease Study 2016, India ranked 145 out of 180 countries on access to healthcare. Ranking at 179th out of 189 countries, India has one of the lowest public healthcare budgets. According to Organisation for Economic Cooperation & Development (OECD), the government healthcare spending in India was 1.3% of GDP in 2018. Compared to this, the average was 7.6% for OECD countries and 3.6% for other countries.

In 2021 India has increased the healthcare budget by 137%. This is in line with the “National Health Policy-2017” (NHP) target of 2.5% of GDP by 2025. But is too low considering the health sector’s numerous needs as well as multiple malpractices.

Given the pathetic situation, the government has to usher in health sector reforms on priority as it has done in agriculture, labour, and education. The remedy lies in a comprehensive health law. And the states must be strict in implementing it in private as well as government hospitals. If states don’t enforce health laws, bringing healthcare under Concurrent List of Constitution is an option.

Government can create competition for private hospitals by building AIIMS-like health institutions in every state. These will become the first choice for patients, doctors, and other health workers.

If hospitals act in illegal and unfair manner, the government has the power to suspend or cancel their licences. Other measures are to impose exemplary financial penalties, and name and shame them. Government can force hospitals to have patient grievance cells for speedy redressal.

It is crucial to have a hospital monitoring and evaluation system based on their track record of ethical operations. Setting up Medical Tribunals and appointing Health Ombudsmen will give speedy justice to patients.

To put these reforms in place, a strong health sector regulator with punitive powers is a must. Insurance Regulatory and Development Authority of India (IRDAI) has reformed the insurance sector to a great extent. Other examples are: Real Estate Regulatory Authority (RERA) and Securities & Exchange Board of India (SEBI). The government can take a cue from the Quality and Outcomes Framework (QOF)-2004 created by the National Health Service (NHS), U.K.

In India, regulatory enforcement is critical because patients themselves finance either the entire or a large portion of the treatment cost. Also, not everyone has medical insurance, and the insurance doesn’t cover every medical problem.

Section 14.2 of the NHP emphasises the necessity to regulate the clinical establishments. It also recommends setting up of an empowered medical tribunal for quick justice to patients. In Section 28, the NHP recognises that “A policy is only as good as its implementation”. It provides for a robust independent mechanism to ensure adherence by public and private hospitals.

The Economic Survey 2020-21 too recommended a healthcare regulator considering that:

(a) the bulk of healthcare delivery in India is through the private sector, and

(b) whereas the treatment is very costly in the private hospitals, its quality is not very different from the government hospitals.

We are at the end of 2021 but the government is yet to create the regulatory set-up based on its policy framed way back in 2017. There is dishonourable monetization of disease, disability, and dignity. An independent regulator with powers of exemplary punishment is the answer.

Health is a very basic need. It has a multiplier impact on citizens’ well-being and nation’s development. Human greed doesn’t care for decency in dealings or for health and life. The government must not allow malpractices in hospitals. We need a regulator with teeth and the power to bite… We need it now.

The edited version of this article was published in The Assam Tribune on 19th November, 2021, as below: 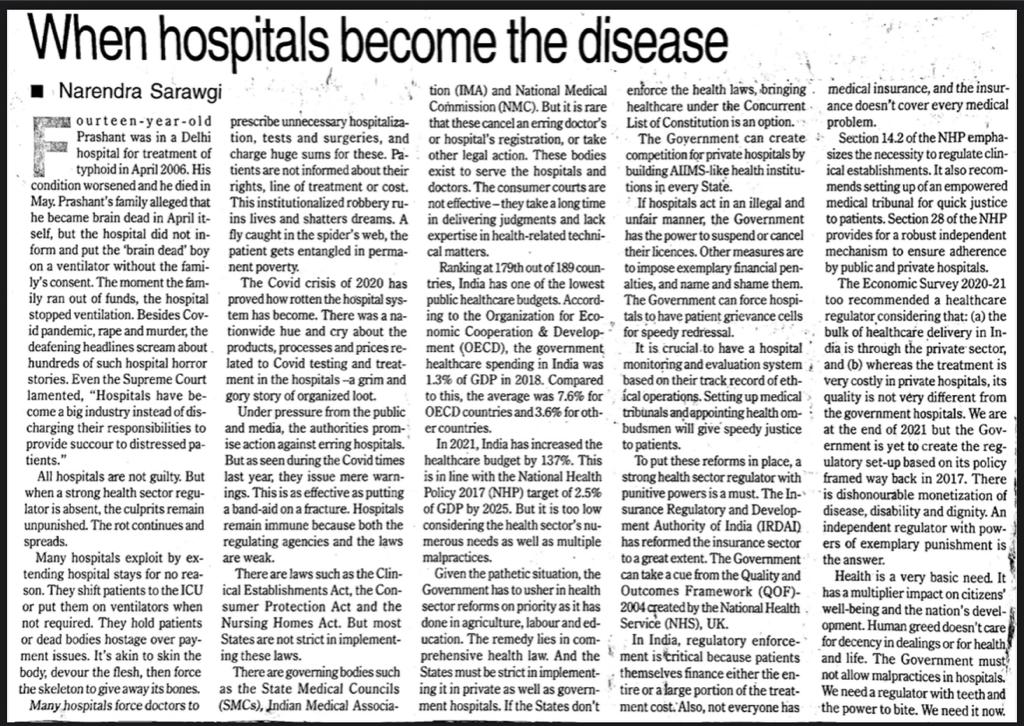 Joie De Vivre ! "....to front only the essential facts of life, and see if i could not learn what it had to teach, and not, when i came to die, discover that i had not lived. ....to live deep and suck out all the marrow of life...to cut a broad swath and shave close, to drive life into a corner, and reduce it to its lowest terms. " - Henry David Thoreau View all posts by nirusarawgiblog

This is a text widget. The Text Widget allows you to add text or HTML to your sidebar. You can use a text widget to display text, links, images, HTML, or a combination of these. Edit them in the Widget section of the Customizer.
Loading Comments...
%d bloggers like this: